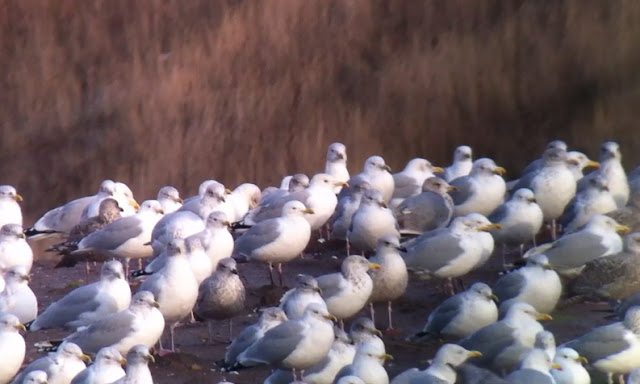 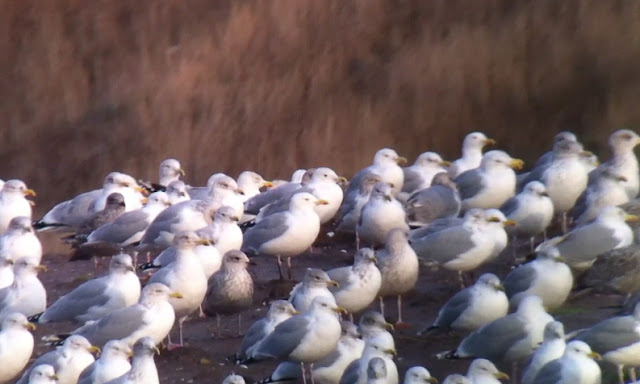 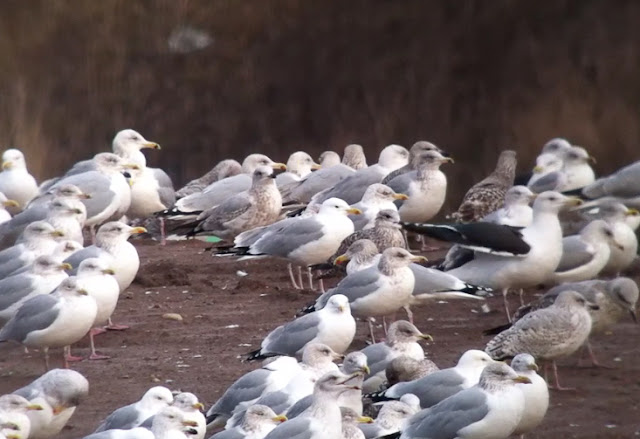 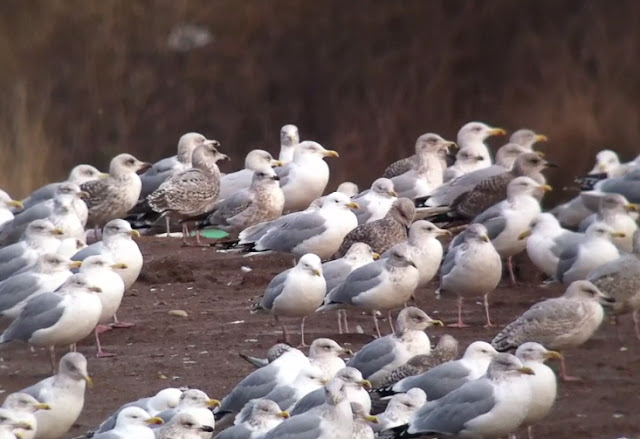 
Videos of these two adults in HD can be viewed on my YouTube video channel here.
Posted by Andrew Kinghorn at 02:44 1 comment:

September is the time when a lot of winter visitors might be coming back to our shores. Wigeon and Pintail are back in Sussex, and the Little Grebes that only ever spend the winter on my patch are back too. my friend (and co-incidentally this gull's photographer) has just reported the first Redwings of the autumn in Sussex. and gull-finders everywhere can rejoice, as all the gulls are coming back!

I wonder when the first white-wingers will arrive, but till then birds like this Scandinavian Herring Gull can give us something to look for. This one was photographed near Shoreham, in West Sussex. Note the diagnostic primary pattern, as well as the stocky, full-chested appearance, the heavy, glauc-like bill and the brutish facial profile. Due to under-watching in sussex this fairly regular race is still a description species, and I'd recommend any sussex gull-er who fancies an easy way to get initials in the next report to keep an eye out for one or two, in any gull flock! If enough get reported the records comittee might actually see sense and accept the regularity of this form (not that I'm complaining about having a 'rarity' be so relatively easy to find!)

Jake G has had more luck with the gulls than me so far this year though, my own attempts involved grilling the hundred or so gulls at Cuckmere Haven today and seeing nothing out of the ordinary! One possible Argentatus, but the views in the field were poor, and the photos I managed were horribly over-exposed in the bright afternoon light. There were a few Great Black-backs (with one gorgeous first-year), and plenty of Black-headed Gulls, but surprisingly no Common or Lesser Black-back. The former should have begun arriving for the winter by now, while the latter are normally present in small numbers all through the summer. If the gulling is this dull next time, I've decided to try and examine primary moult, and see how many of the gulls have a completed moult by this time in the year.

sorry for waffling, and good gulling everyone!
Posted by Liamdan at 12:41 1 comment:

Pictures of bird HERE, also see an additional photograph of the same bird below: 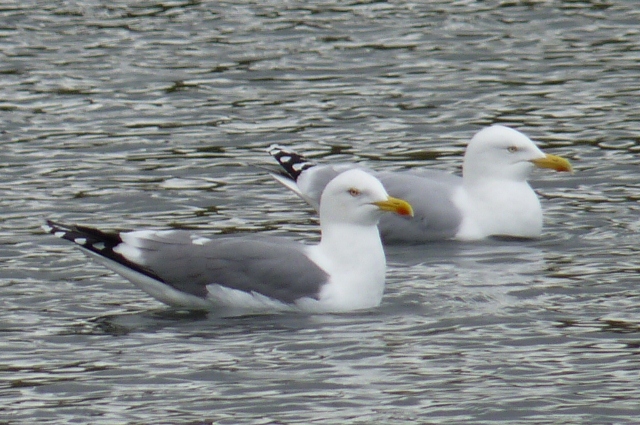 Here are some shots of a hybrid Herring x Glaucous Gull (Viking Gull) which is currently in Preston Lancashire, this is not an uncommon hybrid but its interesting to see nice close up shots of one, allowing for a study of the birds odd plumage. 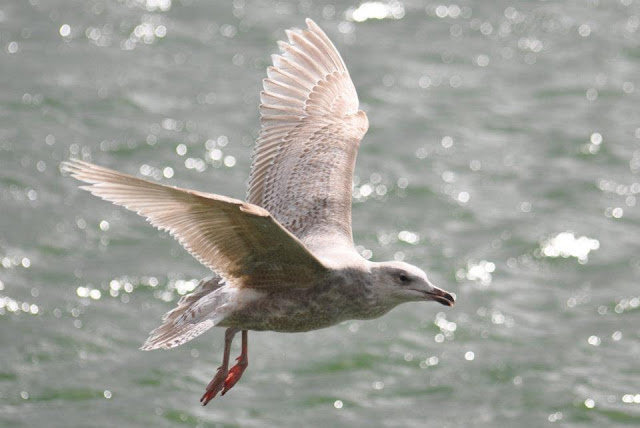 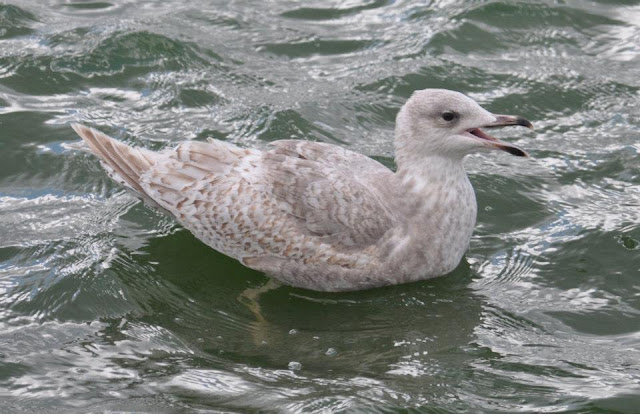 An 'interesting' Gull (all are interesting!) photographed on Seaton Common earlier on this year all photographs are copyright of Mark Newsome. Comments on identification more than welcome; Caspian, argentatus, or hybrid? 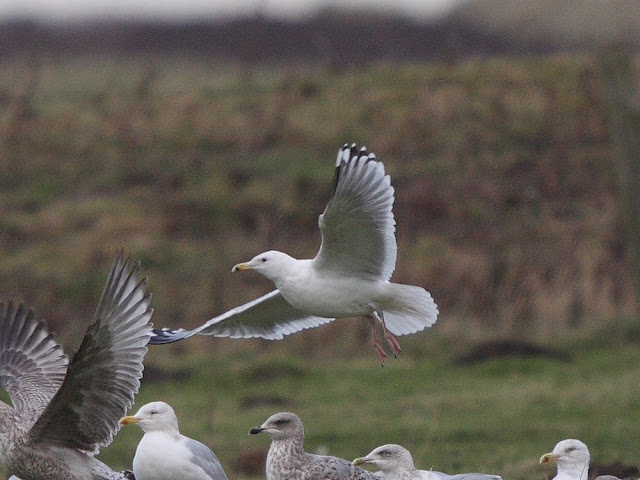 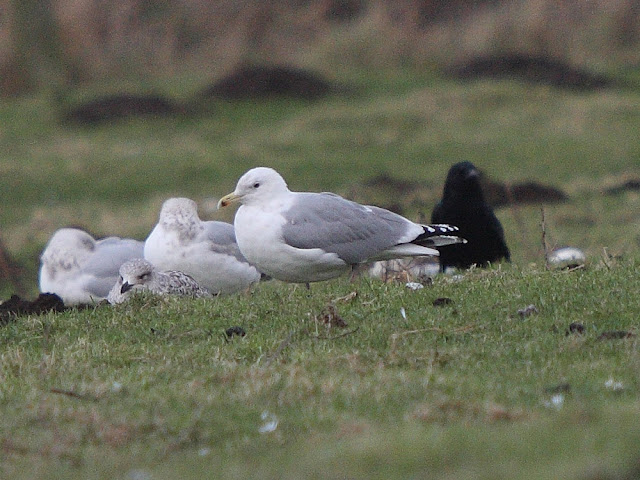 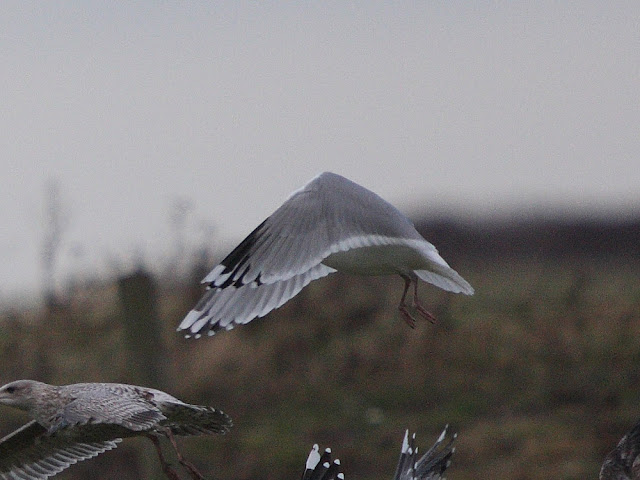 Sadly for me this was a bad memory, I dipped the bird. I won't go into it as it still hurts now! However for thoose who were fortunate enough to see this stunning larus here are some images to help you reminisce. 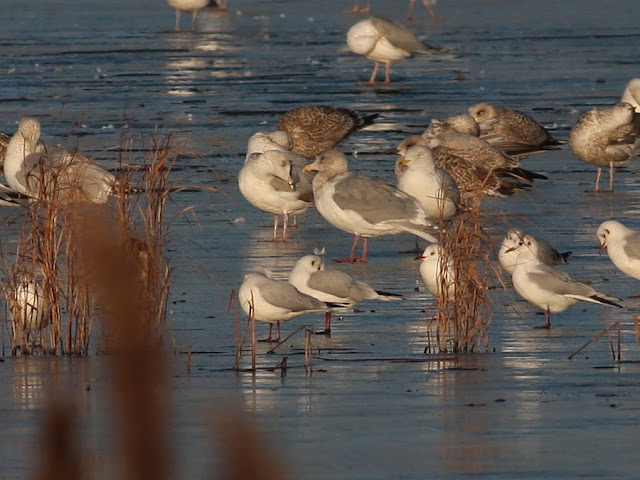 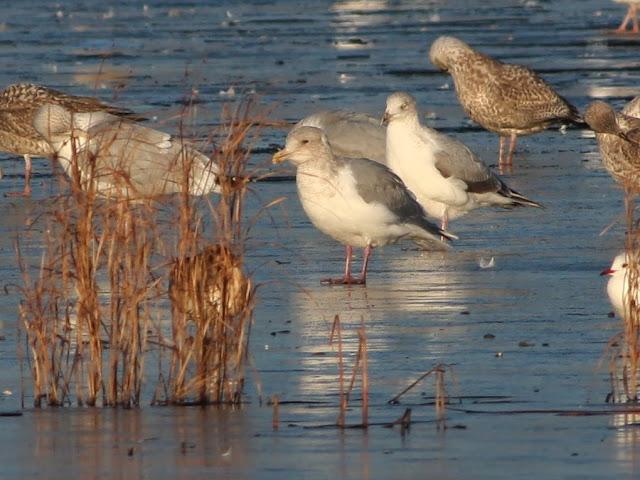 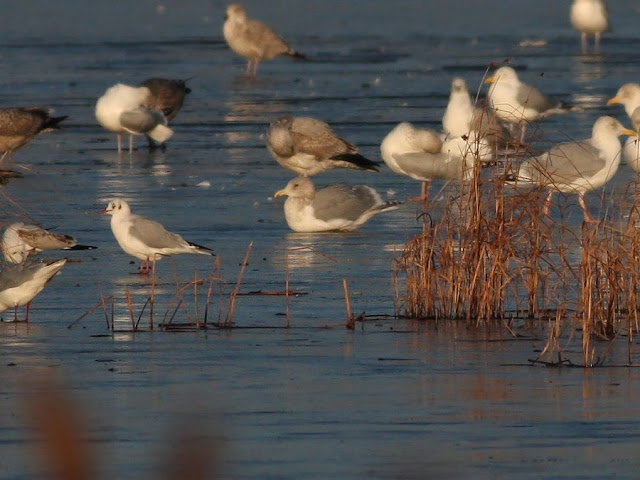 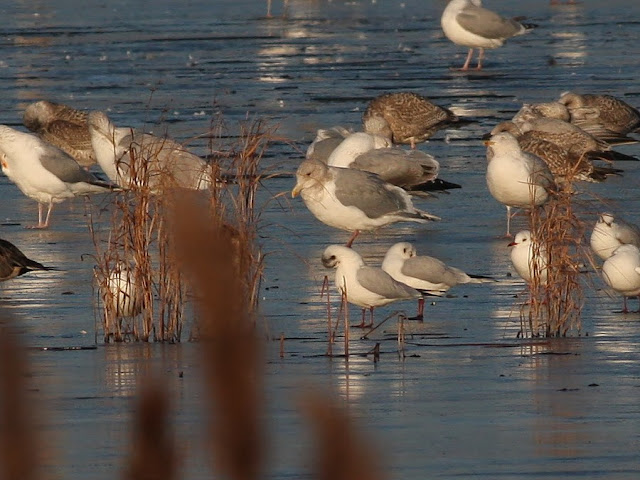 March in Gulls-what to look out for

Here's the premise- a brief guides into some of the wonders of the gulling world March will bring. Enjoy!!

Gull Migration
I happen to live near a great sea-watching spot on the South Coast, where on good days in March flocks of the gorgeous Mediterranean Gull stream by. The beginnings of Little Gull migration are also apparent during the month. Other  more common gulls may be noted migrating, including Common and Black-headed. Last year on spring migration, an Iceland Gull was tracked along the Sussex coast. And with our fantastic year of white-wingers I believe that by the end of the month there will be a smaller, secondary peak in the north of the UK, as Glaucous, Iceland and Kumlien's Gulls from further south return north to their breeding grounds.
Sea-watching can be a great opportunity to watch gull migration in action. Mediterranean Gulls are mainly a southern speciality (they occur further north but in nothing like the same numbers) but in the south it's definitely worth looking out for a few among flocks of Black-headed Gulls on reservoirs, landfills and anywhere else a migrating gull would be tempted to stop and feed. The same applies for Little Gulls, though their numbers are greater later in the spring in my experience.

Gull Moult
By the end of the month adult Black-headed, Little and Mediterranean Gulls will mostly have acquired their full hoods, and adult Common Gull and large white-headed gull species (LWHG) will mostly have lost their winter streaking. The moult of all the juvenile ages of gulls is too bewildering for me to detail fully in this post alone, but for a example lets take Herring Gull;

first winter into second-winter: generally from April-Oct, head first, body second, then mantle, scapulars, coverts and finally primaries
second-winter to second-summer; partially takes place from January to April, including head, most body feathers and scapulars. Coverts begin to moult from mid-may
second into third-winter; generally from April-Oct, as for first into second winter moult


info from 'Gulls of Europe, Asia and North America' by Klaus Malling Olsen and Hans Larsson

I included the two Apr-October moults as, last time I went 'gulling' I saw several first-winter Herring Gulls that had began the moult of their head-feathers, proving not every gull goes by the book and some can moult early. Ageing some gulls can be a challenge at this time of year (though a fun one if you're me!).

Gulls courting
At Rye Harbour, a well-known colony of Mediterranean and Black-headed Gulls, the birds are already starting to arrive, and by the end of March nest-building will be complete (per Barry Yates, warden of Rye Harbour, posting on the Sussex Ornithological Website).
If you live up North, the gulls in your seabird colony are probably the most boring creatures there. But aside from Fulmars, Rock Pipits and the odd pair of Peregrine and Raven, the seabird colonies in SE England consist almost entirely of gulls. Black-legged Kittiwakes have one of their most southerly colonies at Splash Point, right on my doorstep, and it's always great to see them arriving and beginning their courtship, mainly from March onwards.
And finally, though they're almost universally hated, the Herring and Lesser Black-backed Gulls that seemingly nest in almost every city in the country are a seabird colony on a lot of people's doorsteps!

Target Gull Species
MEDITERRANEAN GULL- arrives on breeding grounds, and migrants often appear in good numbers in some areas. The only gulls regularly occurring resident gull species with white primaries, and it's dark black hood, plaintive expression and Eider-like-voice make it a particularly endearing species.
ICELAND GULL- expect a return migration with birds once again concentrated in Northern areas, before their final push towards Greenland.
KUMLIEN'S GULL- the same applies, though they'll be heading for Baffin Island. This is perhaps a chance to connect with one if you haven't already (like me!)
GLAUCOUS GULL- the same as the two above, though they haven't been as numerous as Iceland Gulls this winter
LITTLE GULL-by the end of the month migration of this attractive little species should be beginning, with some in summer plumage. Based on my experience, often seen from sea-watching sites or reservoirs, but can turn up almost anywhere
KITTIWAKE- look out for this gorgeous gull returning to it's nesting grounds or migrating past sea-watching points

also, keep an eye out for some ridiculous vagrant. warm Southerly winds and high pressure might waft an Audouin's or Slender-billed Gull up if we're really lucky!
Posted by Liamdan at 13:41 No comments: